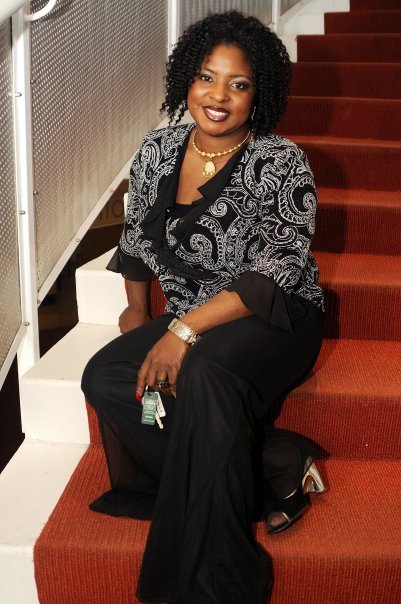 I am Joyce Ashuntantang and I must say I have garnered a few labels in my time, actress, screenwriter, film producer, poet, non-fiction author, short story writer, University Professor, etc. etc. So what do all these labels mean? Do they mask the real Joyce or do they highlight different parts of me. Well let me take you down the corridors of my life and introduce you to the people and events that continue to have an influence on me. I am an unfolding story:

I was born Joy Batuo Ashuntantang. Oh no, I did not make a mistake in my first name. I was named Joy after Joy Collins a British missionary. When I was 6 +, my mother stumbled on the name Joyce and she decided to change my name. Although I became Joyce, “joy” stayed in the contours of my personality. Now my middle name “Batuo” means “Ash” in Kenyang, a language from Manyu Division in Cameroon. Therefore, when I sign my name “Joyce Ash”, call my website,” joyceash.com”, or title my book of poetry A basket of flaming Ashes, there’s certainly a double meaning on the “Ash”. These two names capture my complexity. Yes I could be vibrant, energetic and joyful and the next minute I could like ash, be quiet, soft, grey, mysterious and even moody. Of course the first three letters of my last name “Ashuntantang” also form the word “Ash!” Yes, that last name, which by itself makes a statement. It means “Ashu-the-strong,” the praise name of my legendary grandfather, Chief Etakak Ashuntantang of Ashum village, who ruled during the German era in Cameroon.

I was fortunate to be born into the most nurturing environment any child could ask for. I was born the 5th child out of six children to George and Catherine Ashuntantang. My parents were both educationists who trained in England, although my father later pursued other academic credentials in Ibadan, Nigeria. My father had intelligence- raw mathematical intelligence. My mother on the other hand was savvy with emotional intelligence. She was a queen of the 6th sense and had uncommon wisdom not found inside textbooks. My father had great humor and enjoyed some of the pleasures of this world, but he was a thorough Christian. As such his value systems where framed by Christian ideals. He preached uprightness and integrity and to him education was a lifelong quest. He adored knowledge and academia or what in Cameroon pidgin we will simply call “book”. I cut my reading teeth on my father’s bookshelves. My father knew I loved to read and he fed me with books. He is more than half the reason I get orgasmic in front of a shelf full of books!

If my father were a poem, he would be an iambic pentameter, very rhymed and structured in a familiar way. My mother on the other hand would be “free verse”. She was unstructured in a very insightful way and was gracefully unscripted. A dedicated educationist, a devoted wife and an exemplary mother, she was still very much her own person. Consequently between my mom and dad, there was balance. I learnt to pray and dance at once. So while I grew up with a heavy church influence in my life, the secular was not far off. My parents had a fatal car accident on September 1st 1986 along the Douala- Bamenda road near Melon in Cameroon. My mother died on the spot and my father remained in a coma, dying ten days later. However, because of their “hands on” and highly interactive parenting style, my parents are very much with me today. I quote them daily and they still guide me from the grave. I can still hear my mother’s voice coaching me on various aspects of life. As for my father- he may be the reason I am single again. He set the bar so high as a father and a man. I am not ashamed to say, I still search for him in the eyes of the men around me. My father’s integrity is still cashable in the bank today 26 years after his death. Integrity remains the number one must have quality I look for in a man. Unfortunately this is becoming a scarce commodity.

My siblings remain an inspiration to me. As the 5th child, whatever I have accomplished has happened partly because those ahead of me set the standards. In fact at times I struggled so hard to fit in their shoes that it looked like I would not succeed. Therefore succeeding in school was not an option; it was a must. Since I was also quite different in terms of my interest in acting, singing and dancing, it was quite important to me that I prove to my siblings that I was also academically intelligent. This was the driving force behind my hard work. I had to do well in school like my siblings while still pursuing my interest in the creative arts. Today I continue to be inspired by their achievements. It is with humility and pride that I present my siblings: Dr. Martha Ashuntantang Zama (Educationist), Dr. Gloria Ashuntantang Somé (Nephrologist-Internist), Barrister Tanjong Ashuntantang,), Dr. Helen Ashuntantang (Pharmacist) and Late Emilia Ashuntantang (She died at 13 in form one but left an unchallenged academic record in our house: she came first in her class throughout her stay in primary school.) 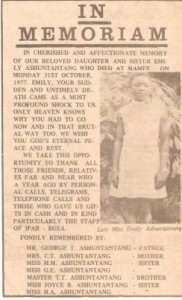 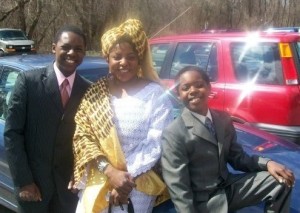 I got married in 1994 and the marriage yielded two exceptional boys, David Ako Abunaw 17 and George Abunaw, 13 and I will add one artistic child- Potent secrets: A film. The marriage lasted 12 years and showed a lot of potential. I know people are always curious and may want to ask, “what happened?” Out of respect for a marriage I believed in, I would refrain from any one sided comments. Suffice to say, my children are a great source of joy and provide a great surge of wind beneath my wings! while in marriage. They give up their essence and become so dependent that when marriage is gone they do not even know who they are without the title “Mrs.” Luckily, I have always been ME. In fact whenever I meet my childhood friends they always exclaim in pidgin “you never change!” And my question is “Why should I?” My yesterdays roll seamlessly into my todays and my todays are heavily handicapped without my yesterdays.

I have always loved performing. From about the age of three I was already performing to family friends especially during birthday parties. My aunt, with whom I spent my early childhood while my parents were studying in England, often tells the story how parents used to invite me to attend birthday parties so I could sing and dance to entertain. As I grew older and entered primary school, I continued performing and singing especially during church related events.
Once I got into secondary school my love of literature galvanized my acting. Although I took literature prizes in Presbyterian Secondary School Kumba and acted in plays there, it was in Saker Baptist College Limbe, Cameroon that I blossomed. Saker provided me with the opportunities to develop my talents. I spent just two years in Saker, form 4 and 5, but these were life-changing years. I received my first award for drama here and my first award for poetry here. Nevertheless, I will say that High school was a turning point in my career as a performer. I got my first newspaper review written by the late Obasinjom warrior, Bate Besong in the national daily, Cameroon Tribune. It was on my role as Desdemona in Shakespeare’s Othello. My acting also caught the attention of theater professionals in Yaoundé, Prof. Hansel Ndumbe Eyoh, David Chuye Bunyui and Thomas Gwangwa’a long before I arrived at the University of Yaoundé.

There was no theater Arts major at the university of Yaoundé, so I majored in English with a minor in theater arts. Despite entering the university a month after losing both parents, I came first in my class that year, a pattern I maintained for the most part during my three years at the university. In terms of theater, I went as far as I could go. I was not only a star actress with the Yaoundé University Theater, Cameroon; I was a founding member of Flame Players, a semi professional troupe in Yaoundé, and Master Key Theater, a student run troupe. The advent of Cameron television during this time launched me as one of the pioneer Anglophone Cameroon actors on national television and thus I was plunged into instant national stardom. I starred in pioneer tele-plays like Seminal Dregs and also performed drama skits and poetry on Thomas Gwangwa’a ‘s “Focus on Art.”

Unfortunately in 1989 when I graduated from the University of Yaoundé, my future through theater did not look promising. There were no openings for professional actors, and the MA in theater arts at the University of Yaoundé was not yet a reality, so after my B.A. in Modern English Studies, I accepted a Cameroon Government scholarship towards a Masters in Librarianship at the University of Wales, Aberystwyth. After my degree in Librarianship, I decided to continue with my second love, literature and I pursued it till I got an M.A., M.Phil. and Ph.D. in English with a focus on African Literature from the City University of New York (CUNY), USA.

What I Do Now: 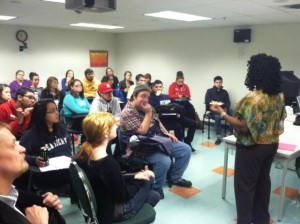 I am a tenured Associate Professor of English at the University of Hartford, West Hartford, CT.

Here I teach English courses including Literature Across Non-Western cultures, African-American Literature and a Survey course on minority writers. Teaching to me is a kind of priesthood. I take it as a privilege to have the opportunity to shape the minds of young people. My professional strength is my intellectual flexibility and versatility. I leverage my interdisciplinary background as teacher, librarian, poet, and performer to create a highly energized and interactive classroom. I am also a published poet and a short story writer. My poems have appeared in many poetry anthologies and I am now completing my second book of poetry, Wings of Words. My first poetry collection, A Basket of Flaming Ashes was published in 2010. I am also focused on researching Anglophone Cameroon Literature. My groundbreaking text, Landscaping Postcoloniality: The Dissemination of Anglophone Cameroon Literature was published in 2009 to much acclaim. Fortunately, my scholarship and creativity have made me a sought-after new voice in African Literature, consequently I get invited frequently to contribute articles to journals/books or give presentations at other colleges and universities.

My hobbies are reading (of course), listening to oldies, dancing and watching a good game of soccer or football as we call it in Cameroon.

I plan on remaining busy doing some of the things I have always done: academic research, creative writing and non-profit activism for positive social change.

My Major Challenges So Far:

Things You Do Not Know About Me:

What I know for sure: