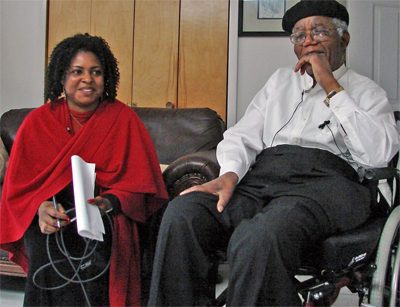 “Okonkwo was well known through out the nine villages and even beyond. His fame rested on solid personal achievements. As a young man of eighteen he had brought honor to his clan by throwing Amalinze the cat”.

With these words Achebe began Things Fall Apart and introduced the world to modern African literature. For some of us these words have become sacred and the author, Chinua Achebe, a demigod.

I have enjoyed teaching Things Fall Apart every year since I became a professor of African Literature in the US. The work lends itself to multiple layers of interpretation which are revealed with every new reading. The novel has sold over eight million copies in the United States alone. It has been translated into 50 known languages.

It is now anthologized in the Norton Anthology of English Literature; it is part of the prestigious Everyman’s library and Chinua Achebe just won the 2007 Man Booker International Prize. It is thus with awe and extreme sense of gratitude that I entered Chinua Achebe’s residence in Annandale, New York, to interview him on the occasion of the Golden jubilee of this masterpiece. With me was Okey Ndibe, author of Arrows of Rain, Oyizer Adaba of Africa-Related.com, and Sowore Omoyele of Saharareporters.com.

The Impact of Things Fall Apart Beyond Nigeria
As we waited for the arrival of the craftsman par excellence, we were quiet. For me it was a first encounter, so I couldn’t help thinking of Things Fall Apart and its impact on the world ,particularly in Cameroon. First, I visited Unoka, Okonkwo’s father, the one who is responsible for introducing the word “agbala” in Cameroon. Due to him many secondary school children who were not macho enough ended up with the nickname “agbala” which means woman, and, it was a derogatory word for a man in Umuofia who had not taken any titles which was the case with Unoka. If some students did not get “agbala”, they got another name “efulefu” meaning worthless person, another word introduced in the Cameroon language arena from Things fall Apart.

With these recollections, I visited the more than dozen proverbs that have stayed with us in Cameroon since the publication of this masterpiece. Some of us quote these proverbs more than those from our ethnic groups. For example, “The lizard that jumped from the high Iroko tree to the ground said he would praise himself if no one else did”; “Eneke the bird says that since men have learned to shoot without missing I have learned to fly without perching”; “A child who washes his hands can dine with elders”; “An old woman is always uneasy when dry bones are mentioned in a proverb”. I marveled at Chinua Achebe’s wisdom realizing, as if for the first time, that he wrote this novel when he was just twenty eight years old!!

As I went over these thoughts there was a noise and we all turned to witness the grand entrance of the Master as he wheeled himself into the living room. With a white shirt well tucked in a pair of dandy black pants, he had a black chic beret -like cap cradling his silvery white hair. What a moment frozen in time in my mind! We all took turns to greet. I did not know whether to shake hands, bow or ululate. I told him so and he smiled, took my hand and tapped me on the shoulder.

Missing Manuscript
We had come variously to chat with the author of Things Fall Apart as he commemorates the birth of that seminal novel but I had also come to follow up on a developing story concerning the manuscript of Things Fall Apart which Achebe told me took him two years to write. It is this manuscript that Achebe sent to London in response to an advertisement in a newspaper. In London, the manuscript made rounds in publishing houses but no one was willing to take the risk of publishing an African novel. Then the manuscript landed at William Heinemann publishers and was shown to one of the educational advisers, Professor Donald MacRae who read it and wrote a twelve –word recommendation “This is the best first novel I have read since the war”. Thus in 1958, Heinemann Educational published Things Fall Apart.

That original manuscript today is missing. The search of this manuscript has been a pet project of mine since I made this discovery during my Ph.D. research in 2003. Where could the manuscript possibly be? Answer: Cameroon. Yes, Achebe had given the manuscript to a Cameroonian who according to Achebe “ was writing a book about Yeats” – the poet whose poem, The second coming, is the source of the title Things Fall Apart.

Despite the unprecedented success of Things Fall Apart, funding to launch a full scale search for this manuscript has not been easy to come by. The Achebe foundation gave me their written blessings only but after meeting the master himself, he has promised to strategically support the search. So it is that as we celebrate this 50th anniversary, the world has been deprived of a piece of history- the original manuscript. This sad fact points to a serious handicap in African literary studies and the collection policies of African National Libraries. There is limited interest placed on important literary manuscripts and other relevant items like an author’s correspondences, but this is another topic for a different day.
When I asked the legendary writer where he wanted the manuscript to go if found, he answered “When it happens let us take it from there…if I had my way, my manuscripts should be in Nigeria”. He quickly added that at this time that is impossibility not only because of the lack of adequate facilities but also the value of the manuscript may not be appreciated. It should be noted that some of Achebe’s novel manuscripts including sections of Arrow of God are archived in Harvard. He said this was a result of his “disenchantment” with what happened to the manuscript of Things Fall Apart.

Achebe on Anglophone Cameroon Literature
With the manuscript question tackled I now quizzed the sage on Anglophone Cameroon. He remembered some of his school mates in Umuahia who were from the then Southern Cameroons like the late Lawyer Noto and Ambassador Nkweta. Achebe also commented on the historical and political reality of Anglophone Cameroon. When I asked him “can stories thrive in a region that is still struggling to define itself with a majority francophone population to the right and populous Nigeria to the left?” He answered in the affirmative, arguing that being in such a tight spot is already a fertile ground for stories.

On the death of Bate Besong whose first volume of poetry he launched in 1980, Achebe made it clear that it was up to Cameroonians to maintain his legacy, just as Nigerians have preserved and promoted Christopher Okigbo’s legacy. Leaving Anglophone Cameroon we delved again into specifics on the menu of the day-Things Fall Apart. The questions where many and the answers came in deliberate, quiet utterances reminiscent of a craftsman who takes his time even with his verbal speech, making sure that he gets the right word before he utters it. Listening to him, you have to wait until the last word falls and there is a pause because even his pauses have a structural meaning.

By the time we wrapped up, he had touched on a myriad topics including his innovative use of English which he says he can now call his “invention”, the character that best represents him in Things Fall Apart, his reaction to those who think he is a chauvinist because of his representation of women in the novel and the impact of his auto accident on his life and writing.

After getting his autographs on all his different books I could lay my hands on, I could not help but go down in front of the master to ask for his benediction, which tickled him to laughter but he blessed me all the same. I still carry the flutter in me.