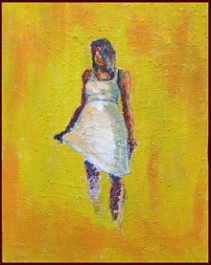 I grew up speaking English in Cameroon. In fact, I was born into English and never considered it a foreign language. I was also born into Kenyang, the language of the Bayangs in Cameroon, and Pidgin English. I learnt all three languages at the same time and in the same house.  However, English was the language of instruction in school and the language of the literary texts which included works by British and African writers. My fun books in English included Lamb’s Tales from Shakespeare, Jane Eyre, Eze goes to School, The Drummer Boy and Things Fall Apart. In addition, my parents studied in England in the 1960’s and as I grew up, I visited England through their stories, pictures, music, my mother’s kitchen utensils and my father’s bookshelf.
Indeed my childhood was immersed in English. Buea, where I grew up, is situated at the foot of Mount Cameroon. It is a town built by Germans in the 19th century. During my childhood, Buea was remarkable for its cold weather, the German architectural relics and the English Language, a British legacy. Inhabitants of Buea were known in Cameroon as “I was” because they preferred speaking English amongst themselves instead of the more popular Pidgin English. I did not realize that English was the language of the minority in Cameroon and as such carried with it a stigma apparent in another section of Cameroon.
First, a Proud Cameroonian…
In my history books I learnt that the Portuguese discovered Cameroon and named it after a river, “Rios dos Cameroes” meaning “river of prawns”. My history books also taught me about the Berlin Conference, German occupation, and the British/French rule in Cameroon. I learnt all these facts absentmindedly and regurgitated them perfectly during exams. However, I was a child born at the height of African nationalistic fervor and so my primary school history lessons included local history. For example we learned that the founder of Buea was a hunter named Njie Tama Lifanje. This local history captivated me; it just seemed easier to understand.

I was a talkative, vibrant and energetic girl in primary and secondary school.  I participated fully in the cultural festivities marking our two national holidays, 11th February and 20th May.  On these national holidays we had a marching parade.  I participated fully in these parades and in my senior years in primary school, I held the Cameroon flag or school signboard and marched ahead of my entire school. I usually felt a great sense of pride as we marched and sometimes sang to a popular tune, “Cameroon, My native land”. During the eve of the national day celebrations, we usually had a choral competition. I was our “choir conductor” in primary school. I still remember one of our competition songs vividly:
Our countrymen and women listen to these words
Listen now, oh listen now.
We sing to him our comrade praising but his name!
We do this with joyful hearts.
Ahidjo our comrade has worked for us.
We must follow and serve our nation.
I bathed in this kind of national rhetoric daily. I believed in Cameroon and in my president at the time, Comrade Amadou Ahidjo. I had to work for my nation. I felt safe and proud belonging to Cameroon.
An Invisible Anglophone Cameroonian…
Then, I passed my GCE “A” Levels and went to Yaoundé to attend the only University in the Country at the time. Once I got to Yaoundé, my voice was under attack and my sense of Cameroon too. All around me French prevailed. After a few years of French in primary and secondary school, I could understand it a bit, but I could barely speak. With a less than perfect knowledge of French came a less than perfect sense of self. My confidence began to suffer. I would enter a taxi and barely say my destination. I could not talk aloud for fear of ridicule that easily came from Francophones who regarded Anglophones as inferior. Sometimes I would sit in a taxi with other people and there would be an interesting conversation going on in French and I would remain quiet even though I would have loved to join the conversation.  In the market the same thing happened. Like in other African countries, the market in Cameroon is a place to buy and unwind, but in Yaoundé it had become a linguistic duel. I would go to the market, barely point to what I want, ask “Combien?” (How much?), pay and take off. I could not bargain which is the highlight of the African market place. I had lost my speech in Yaoundé.
On the university campus, we could not speak English freely. Each time Francophone students heard us talking in English, they would poke fun at us and call us “Biafrans” from Nigeria, a reference to the fact that Anglophone Cameroon was governed by the British as part of Eastern Nigeria. We were thus labeled as foreigners! At the university, Anglophone girls were more under attack than Anglophone boys since we could not physically fight back. When francophone boys saw an Anglophone girl and recognized her as such, they will harass her with slogans and curse words. Sometimes they would scream “Anglo tu m’aime? Oui je m’aime.” (Anglophone, do you love me? Yes, I love me.) This was to poke fun at our inability to communicate in French. Our poor communication in French was used as a reflection of our intelligence. Consequently we were looked upon as “stupid”.
To compound matters, around the city of Yaoundé, all signs were in French and when they did have English translations, the English version would be in tiny letters under the French version captured in bold letters. The subtle message was that English was the lesser language, and English Cameroonians were second-class citizens.  I began to feel like I had no country. My sense of nation began to suffer.  The Cameroon I had built in my mind started crumbling. Then, I read Benedict Anderson’s assertion that the nation is “an imaginary construct,” and it made perfect sense. The Cameroon that had been constructed in my mind as a young girl growing in Anglophone Cameroon simply did not exist in reality.
After graduation, I won a Postgraduate government scholarship to study Library Science at the University of Wales, Aberystwyth. As a government sponsored student, I was a Cameroonian abroad, yet amongst my classmates I had a hard time convincing them that Cameroon was a bilingual Country, with English and French as the official languages. The few who knew Cameroon believed it was a French country, period. In those days I would go to the library and pick up books, bibliographies, magazines, anything on Africa to see how Cameroon was presented, but, to my dismay it was always presented as part of French Africa. English Africa was Nigeria, Kenya, Ghana, Malawi, Zambia etc. Anglophone Cameroon was lost. That is still the case to this day…
This is an excerpt of a paper originally presented at the Graduate School and University Center, City University of New York (CUNY), USA in 2000.
Picture: Masquerade by Abidemi Olowinara.