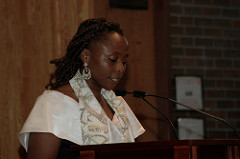 Barbara Tah Gwanmesia celebrated author of Vasona’s Secret is our guest in the Spotlight. A graduate of Journalism, International Relations and World Politics with a confessed avid yearning for an understanding of how the human mind works and mankind’s reason for being. She generously gave EduArt a peek into the motivations that make her tick. See full text below.

Barbara Tah Gwanmesia sits down for a chat with Dr. Joyce Ashuntantang:

Barbara Tah Gwanmesia is a writer today. What is your background? Experience? Education?

I was born in Cameroon (Bamenda), left the country after 18 years for East Africa and later Europe. Though I studied Journalism, International studies and International Relations in England and The Netherlands, my formative years in Cameroon – especially those spent in PSS Kumba (secondary school), had the greatest effect on me both as a person and a writer – probably because this was the only time I studied literature. I have done so many different things in my life that I hesitate to say I have ever had a career. I wonder if, for a writer, there is any other career possible – though music and singing have been almost as important to me. Then again, writing is not a career. It is a way of life, in my view.

What inspired you to start writing?

The first thing I remember was waiting for my cousin in an empty classroom in her primary school in Kumba. I was about twelve years old and in between primary and secondary school. She was taking evening classes in preparation for her First School Leaving Certificate. As I sat waiting for her, I started writing a church sermon? I don?t know why I began writing that sermon. But I never stopped writing after that. I could not stop. You see, I had discovered my reason for being.

Who are some of the writers that have inspired you?

Virginia Andrews, Paolu Coelho, Marie Corelli, Chinua Achebe, Andre Brink, and so many others. In fact, a new crop of writers are beginning to inspire me? amongst them some new Anglophone Cameroonian writers.

What is on your reading table as we speak?

Wait a minute, let me see; Farmer Management of Gene Flow, Out of the Body Experiences, Quantum Medicine, and a wade of papers on African Studies.

When is your favorite time to write?

Night. Deep in the night; but because I have young children and do not have the luxury of time, I write whenever I can.

Now to Vasona’s Secrets. I can’t get over that novel. This must have been a huge project- 506 pages. So how long did it take you to write it?

The first draft took, I think, 3 years. That draft was about 713 pages. Because I was, at the time, not satisfied with the book, and remained dissatisfied with it for years, I kept going back to it to try to fix things. I ended up shelving the manuscript for several years. Three years ago, I decided to give it one last try. In a period of six months, I sat down and rewrote the book. The version you have was the first satisfactory result, though I was not quite finished with it, even when it got published in that version. That was a celebratory publication, before the final edit.

Are any of the incidents in the novel true?

One of the effectiveness of this novel lies in the way you keep the reader in suspense. How did you achieve this?

I would think you would have had the temptation of rounding up the story sooner.
Yes. But the book had taken a life of its own. The characters were dictating their lives to me, and scenes imposing themselves on me.

Ni Dob is a character that I wanted to hate so bad in the novel yet you made this man so irresistible and of course at the end we know why. Tell us how you went about creating that character.

In the first draft, he was this gorgeous guy who fitted snugly in my dreams. That was a good thing, because it gave me the opportunity to look at perfection and nitpick imperfections. His character became an important one to me, because in him I got the opportunity to show how vulnerability, fear, even cowardice can lie hidden in the most beautiful, powerful and formidable of veneers. I wanted his heart, I needed his pain. I needed him to be human.

How did you go about choosing the name of your characters? Do the names carry any significant meaning beyond what we perceive?

A number of the names do carry significant meanings. The rest just came to me. One thing though, I gave characters names that were close to my heart? names of family members. In terms of significance, the name Jingisi was meant to imply English in Mungaka, but I bet many Mungaka speakers will not notice that. The name Veranda was meant to have no meaning, to be soulless, so to speak.

One of the exciting sections of Vasona’s secrets is the section when Charlotte and Veranda (a.k.a Vasona before her secret is revealed), the two journalists go to Bali. You create an artistic paradise in your description of Bali and Ni Dob’s mansion below the ground. It is almost surreal. Is this the Bali you know or is it the one created out of nostalgia after your long stay abroad?

The Bali I describe is the Bali I saw when I first visited it. I was very much like Charlotte. Everything was heavenly: the people were beautiful, the earth seemed to breathe life, and the culture was rich. I was simply carried away. But as I grew older, I came to see the other side too; the hard work (hardship for some) and the struggles. And of course I realized that Bali was not merely what I saw; it was many things to many people.

Dobgima Dohnji’s unusual home is indeed surreal. My reason for bringing such an architectural feat to life was to show what Africans do and are capable of doing. I needed Dob to be sophisticated in every sense of the word, but I also wanted him to be a loner, an eccentric. You have to be eccentric to build a house like that. That house served many purposes.

If one where to ask you bluntly: what is your message in Vasona’s secret. What would your answer be?

Think beyond the self. Immerse the self in true empathy.

If this book stops one single person from acting out rage or pain (acting without consideration for others), it would have fulfilled its purpose. As sweet as Vasona was, as fiery as Veranda was, as forthright as Dobgina Dohnji was, they all acted from their pain, without regard for those who cared for them.

What is Barbara working on now?

Rewriting my second book and researching the third book.

How do you spend your time when you are not writing?

If I am to forget the bit about running after my children, I would say singing. But mostly I spend time trying to learn which means reading a lot of esoteric and scholarly materials, as well as reading about new things on the net. New and interesting to me, that is.

EduArt wishes you well in all your creative endeavors. 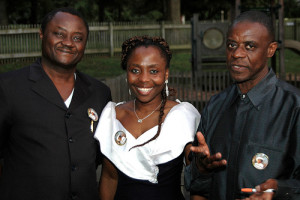