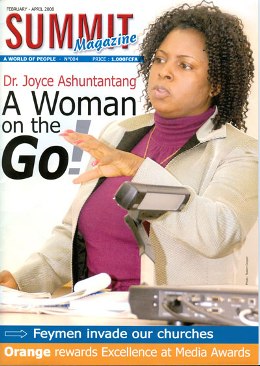 Joyce_ashuntantaeduart When one talks with Joyce Ashuntantang, one is tempted to think she has lived for a hundred years. That is because Joyce has always been on the go. She has studied in Cameroon, Britain and the USA. She is widely traveled, France, Morocco, Ivory Coast, Nigeria, Mali, Benin, Senegal, Switzerland, Belgium etc. Some know her in Cameroon as the star actress of the Yaounde University Theatre, flame players and the golden days of CTV/ CRTV. Her talent and beauty shown on stage as she dramatized poems and plays on late Kwasen Gwan’gwa’s Focus on Art.

Some of her memorable plays on stage and TV include Seminal Dregs by Thomas Gwan’gwaa. In this play she starred as Pamela the young university student who is raped by her father’s friend, Mr. Ngange, acted by the late Joseph Ndanji. Joyce acted this role so well that one day on the streets of Yaounde, a child pointing to her, shouted in French “Voila la fille qu’on avait violée!”