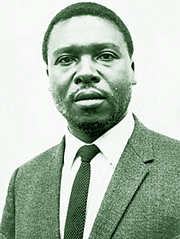 Kenjojumbam In 2005, veteran Cameroonian writer, Kenjo Jumbam, author of The White Man Of God died in his native Nso, prematurely ending the career of one of Cameroon’s finest writers who never lived up to his fullest potential because of the absence of viable publishing outlets. In this commemorative article, Joyce Ashutantang shows how Jumbam’s literary career mirrored that of Cameroon literature in English:

To situate Kenjo wan Jumbam within the Cameroonian literary pantheon, one would have to go back to the literary history of Anglophone Cameroon.

I Am Vindicated dramatises a conflict between modernity and tradition represented by Bola, a schoolboy and Baba Kasim the village fetish priest. However, modernity is made to triumph when Bola reveals the priest as a charlatan and the priest commits suicide.

In 1969, ten years later, Lagos African University Press (which later became Pilgrim Publishers) published the first novel by an Anglophone Cameroonian woman titled Promise. It was authored by Jedida Asheri, the pen name of the late Prudencia He-ne Chila (I got this fact from the baobab, Kenjo Jumbam).

Set in Banso, Promise is a classic female bildungsroman that compares favourably with celebrated novels of this genre anywhere. In addition, Oxford University Press published Nsanda Eba’s The Good Foot in 1977, seven years after it was written.

However, to earn money and fame as a writer one had to publish with multinationals like Heinemann, Fontana and Macmillan. Some aspiring Anglophone writers sent their writings abroad, but the chances of publication were very slim. The distance of the foreign publisher was not only cultural, it was physical.

To sustain the budding African Writers Series, Heinemann shopped for African writers who were based in Paris and had produced well-written works in French. There was already a vibrant African community in Paris in the sixties, which had developed from the negritude tradition and was creating a dynamic black aesthetic.

The works translated included Oyono’s Une Vie de Boy (Houseboy), and Mongo Beti’s Mission Terminé (Mission to Kala), which have erroneously been considered by some readers as written by English-speaking Cameroonians. Heinemann also published Mbella Sone Dipoko’s A Few Nights and Days in 1964 and Because of Women in 1968.

Technically, therefore, Kenjo wan Jumbam is the first Anglophone Cameroon writer to publish with Heinemann’s African Writers Series. Jumbam was a postgraduate student at the University of Leeds when he sent his first manuscript, a love story, to Heinemann. It was rejected but Jumbam continued writing.

He had been writing for five years when Heinemann accepted Jumbam’s Lukong and the Leopard with The White Man of Cattle for young readers in 1975. Stephen Arnold, a renowned critic, describes this volume as “an unassuming pair of beautifully told tales… intended for secondary school students but a pleasure for all ages”.

For several years, The White Man Of God was a required text in secondary schools and was also studied frequently at the University of Yaounde. Above all, it attracted a lot of critical attention amongst literary scholars. Jumbam’s talent as a writer is visible once you pick up any of his works. Again, Steve Arnold in 1978 predicted that, “Jumbam is a writer of international stature and will certainly be widely known before long”.

Unfortunately, the reduced activities of Heinemann on the continent and difficulties of publishing in Cameroon left Kenjo Jumbam with many unpublished manuscripts and an aborted rise to international fame.

Annie Gagiano also echoes these sentiments when she writes, “The Cameroonian novelist Kenjo Jumbam is not as well known as his work merits”. Bjornson equally refers to The White Man of God as “the best known post-1972 novel written by an Anglophone Cameroonian” and to the two short stories as works that “invite readers to exercise their own independent judgement in drawing conclusions about the relevance of traditional and modern values to life in contemporary Africa.”